I wanted this novel to be, among other things, a sort of British ‘road movie’, finding narrative interest in a journey along the M40, the A5192 and the A74(M) – names which always sound so prosaic alongside their glamorous American counterparts like Highway 61 or Route 66. In this respect, Lindsay Anderson’s film O Lucky Man! was a big influence. I’ve always loved the way that film finds a kind of bleak visual poetry in Britain’s motorway network. I was also inspired by Henry Fielding’s two great picaresque novels, Joseph Andrews and Tom Jones, and the narrative energy they generate by sending their heroes on long journeys filled with random comic adventures.

As for my own hero, Maxwell Sim, I was hoping to make him a kind of Everyman, although I wonder now if such a thing is possible in today’s world, fractured as it is by the onset of identity politics. I wanted, at any rate, to make him as ordinary as possible: an ordinary man, doing an ordinary job in an ordinary town. 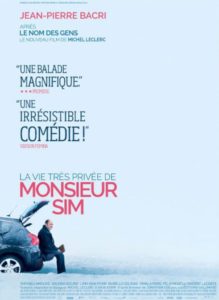 That, I suppose, is the real ambition of the novel: to find a kind of mystery and romance and strangeness at the heart of the deeply ordinary. I always hoped that this would give the book a universal appeal, despite its many specific references to British geography, and so it was very satisfying when the French director Michel Leclerc adapted it for the screen in 2015, relocating all the action to France, and succeeded in capturing the essence of the story. Jean-Pierre Bacri, although he bears no physical resemblance to my own image of the central character, was brilliant in the title role. You can see the trailer for the film here.

Buy The Terrible Privacy of Maxwell Sim as an audiobook