Out of all my published novels, the idea for this one probably goes back the furthest. Some time in 1977 or 1978, when I was still a schoolboy at King Edward’s School, Birmingham, I began to write a novel based on my experiences there. The title was Half Asleep; Half Awake, after the track composed by John Greaves on Henry Cow’s album Unrest. Really the only thing that survives from this original conception is the word Unrest, which Benjamin Trotter adopts as the title for his never-to-be-completed magnum opus in The Closed Circle.

I only wrote about fifty pages of this novel at the time, but what lodged in my head was the idea for a story set in a school, in which the school would serve as a kind of microcosm for British society as a whole – rather in the way that Lindsay Anderson had used the public school setting in his film If …

Twenty years later, when I finally came back to this idea, I decided to name the book after an album I used to love as a teenager: The Rotters’ Club, by Hatfield and the North, a band central to the so-called Canterbury scene of the 1970s. This led to my meeting, and becoming friends with, many of the musicians who had been involved in that movement – including John Greaves, thereby providing a connection to the book’s original title.

The Rotters’ Club has been adapted for BBC radio by Simon Littlefield, for BBC television by Dick Clement and Ian La Frenais, and for the stage by Richard Cameron. Richard Cameron’s version, staged at the Birmingham Rep in 2016, was a major inspiration for my novel Middle England. 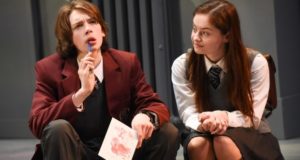 To answer a question which comes up all the time, viz. ‘How autobiographical is the book?’, I can only say that all the background detail of the school and the Birmingham suburbs is taken from my own life, whereas all the main developments in the story are fictitious. It’s true that when I was a schoolboy I did, briefly, discover God when he answered a prayer that I made to him in the classroom, but the missing item that I needed so desperately was a piece of homework, not a pair of navy blue swimming trunks.

Buy The Rotters’ Club as an audiobook